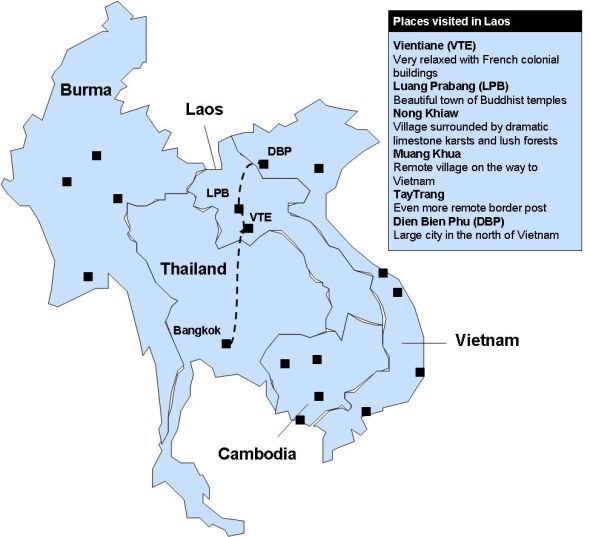 Finally we were on our way to Vietnam, some home comforts and a little warmth; however at 5 am we woke to find that the whole of Munag Khua was pitch black and a steady rain had begun to fall. Martin volunteered to go down the rickety staircase, made from scraps of wood, to find the man who was responsible for the ferry, which would take us 10 metres across the river to the bus.

A search with a head torch and a few calls in the dark woke the boatman, who had the monopoly on the pathetic ferry that, if the river were lower, and our baggage lighter, we would totally have crossed on foot.  Once we made it to the dock with our baggage, we found that a few others were waiting for the rusty boat, which rocked alarmingly in the water as we boarded. Onboard we were hostage to the grossly inflated fare, which the boatman (who appeared to be a little hung over) demanded.

Once the motor was on, we travelled for approximately 30 seconds before being delivered to the opposite bank of the river, where the bus was due to leave at 5:30 am. We found a bus, but no driver and nobody on that side of the river seemed to be awake yet. We waited, as directed, outside the largest building there and sheltered from the rain, taking turns to go to the loo behind the parked bus.

Approximately half an hour later, the bus began to be loaded with all manner of mats, food, tools and building materials. This loading would continue all the way to the border with Vietnam; we stopped frequently to load yet more people, perishable, non-perishable and live goods throughout the morning. Surprisingly, some of the young people we picked up were wearing Diesel jeans and toting Louis Vuitton, Gucci and Coach handbags – of course none of them were real. The irony of the fact that these luxury brands had found their way here, to the north eastern corner of Laos, a place swimming in a sea of mud, where people live in depressingly basic conditions and signs such as the one below can be seen, was not lost on either of us.

The journey along the treacherous hairpin bends on the road to the border was much longer than we had anticipated. When we finally arrived, a large group of guards, who looked formidable in their smart uniforms, were waiting. As the only farangs (foreigners), we were singled out; a guard barked at us indicating that we had to sit down and submit to a temperature check with a digital thermometer. As I submitted to the gruff guard who inserted the dirty nozzle of the digital thermometer into my ear, I began to wonder if it was possible to catch something nasty from it. 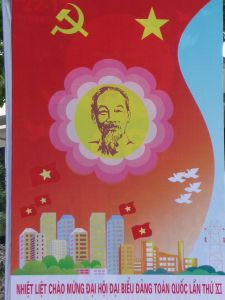 After about 15 minutes, we were ushered into Vietnam. As we filed past the statue of Uncle Ho in the hallway, which was uncannily reminiscent of the statues of Kim Il Sung and Kim Jong Il we had to bow in front of last year in North Korea, we exchanged a knowing look. Finally we were in Vietnam!

“Let’s do something different. I don’t want to leave Laos saying that I only visited the tourist spots of Vientiane and Luang Prabang…” That was how Martin convinced me that we simply had to go north and experience what the Lonely Planet had talked up as two beautiful gems of northern Laos: Nong Khiaw and Muang Khua (pronounced like the Mmmmwa which fashionistas moan as they kiss one another plus ‘ng’. Repeat: Muang (‘Mmmmwang’), followed by the equally chic sounding Khua (pronounced ‘croix’, as in Christian Lacroix). I should have known…

Two consecutive days on boats fit for 4-6 people, which actually carried up to 30 people plus luggage! Travelling upstream along a river with numerous rapids (our motor straining against the current!), and not a life jacket in sight. Sharing boats with livestock, bare bottomed toddlers and tribes people, from the middle of nowhere, who spent the first hours staring at us like we had just landed from outer space. Sitting in one position unable to move because the human cargo was so tightly packed in. Sleeping in accommodation which now pushes the teahouse near Everest Base Camp out of 1st place as the coldest, most depressing and uncomfortable accommodation I have EVER experienced. It was certainly an experience to remember.

When I first saw the boat to Muang Khua, I felt like a participant on candid camera. I wanted to laugh, protest and get out my camera – all at the same time. Could this be serious? How on earth were we two going to fit into a boat which was already loaded down with cargo, more people than I could count and which looked like its final voyage was imminent?

Unfortunately, I was unable to snap a pic quickly enough before we were impatiently herded onboard. I spieed on small space, perhaps 30 cm wide, in the middle of the boat. Before I could get there it was taken. What were we to do now? Of course we had to do what everyone in Asia from Tokyo to Delhi, Bangkok to Beijing, learns from the youngest age – we had to MAKE ourselves fit. Swinging a muddy hiking boot toward the hoard of people who were already onboard, caused the crowd to magically part so that about 10 cm of wood became visible. I then eased myself between a man and a young girl, leaving Martin to do the same on the other side of the boat. The first rule in Asia: There is always space.

Once on the tired looking vessel, I thought it inappropriate for us to get out the camera, as we did not know whether the locals had any superstitions about lenses and did not want to get off to a bad start with the people we would be spending the next seven hours with. 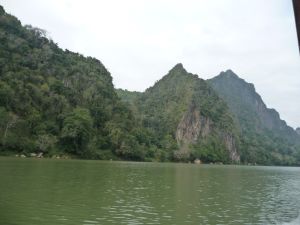