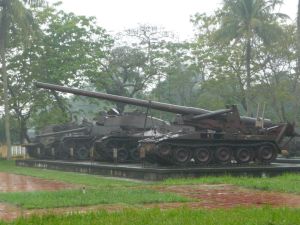 Some Vietnamese describe the 28 year period from 1946-1974, starting with the independence struggle against the French (which ended in 1954 with victory in Dien Bien Phu) and climaxing in the Vietnam war, which began as a civil war shortly afterwards and escalated into a conflict which had dire consequences for Vietnam’s Indo-Chinese neighbors, as the 10,000 Day War.

Almost an entire generation was lost in this string of armed conflicts, yet despite all that Vietnam has been through, it seems to be an incredible success story. It is hard to believe that a place so ravaged by war has, in a mere 30 years, turned itself into one of the premier backpacker magnets in Asia. It’s like imagining that in 25 years Mogadishu or Kabul could each host their own Khao San Road; that Somali beaches will be a place of pilgrimage for sun worshippers or that the Afghan mountains will be the place to go for a trekking holiday.

Most of us have seen Apocalypse Now, Platoon and Good Morning Vietnam. We know who veterans are, we’ve heard of Agent Orange, and of course, of Napalm. Nixon, Johnson, John and Yoko’s Bed-in, Muhammad Ali… We think we know about the war, until we visit Vietnam and are confronted with Vietnamese perspective on the brutality that it unleashed. 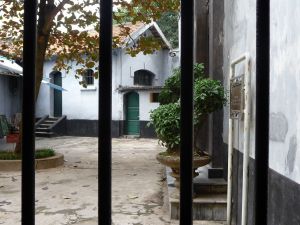 Our first encounter with the war was at the sarcastically named Hanoi Hilton. Hoa Lo, a prison in Hanoi formerly used by the French colonialists to imprison and punish (torture) dissidents, was used during the Vietnam War to hold American pilots who were shot down, the most famous of whom is Senator John McCain.

A hush fell over the prison as visitors shuffled from cell to cell. Photos and exhibitions on prison life detailed the atrocities of the ‘American Imperialist puppets’. Walking around the dank cells, which were painted black, it was hard to imagine how the inmates had survived the damp cold of winter, which was chilling us to the bone despite the extra layers we had put on; it was not the stereotypical tropical heat and humidity that you normally see in Vietnam War movies, but something more akin to a damp European Autumn.

Captions that were eerily reminiscent of some of the propaganda we saw in North Korea last summer accompanied a number of photos in the room where McCain’s fatigues were displayed: Here were POWs cheerfully plucking poultry for their Christmas dinner; there were American servicemen decorating a huge Christmas tree. Groups of men feasted on overflowing plates of festive food as photographers snapped photos; servicemen smiled as they unwrapped gifts and care packages from family and friends… 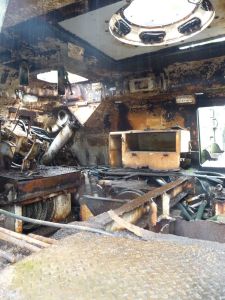 Around the citadel in Hué we saw quite a few abandoned war vehicles including tanks were completely burnt out; crude reminders of the soldiers who must have lost there lives or been seriously injured within minutes of being hit. Looking at the charred, rusting remains it was impossible to comprehend what the last moments inside the claustrophobic inferno must have been like. 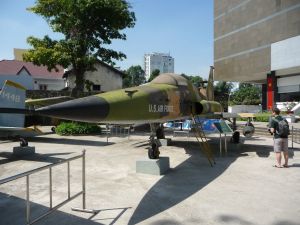 The sunny forecourt of the War Remnants Museum in Ho Chi Minh was like an playground for aerophiles; the darker chapters of Vietnam’s war with America were detailed inside. Though the exhibition rooms had been updated since I was last there – the new exhibitions had a softer tone, absent of the emotive anti-imperialist language so prevalent at the Hanoi Hilton, the exhibition was definitely for those with a weak stomach.

We strongly recommend a visit to the room which commemorates the contribution of  war correspondents and photographers making the atrocities of the war public, and garnering support for the anti-war movement.

Most disturbing of all was the section on the biological warfare waged on Vietnam, which documented the toll that it continues to take on the reproductive health of many Vietnamese decades on. Photographs of the grotesque deformities caused by exposure to toxins contained in the rainbow of Agents Orange, Purple, Pink, Green, Blue and White, were met with a hush in the exhibition hall. Jars of deformed foetuses (foeti), photos of burn victims, tales of conjoined twins, still births and the victims of landmines (which continue to be accidentally detonated by civilians today) muted every visitor – a rare thing in our switched on, plugged in interactive world. Several visitors, who had obviously not been prepared for such scenes, retreated promptly with their children who would definitely have had nightmares after seeing what was on display.

Out of respect for the victims of the war, we did not take any photos inside the museum, although we saw several people hungrily snapping away in a way that irked us both. Later that day, while attempting to make sense of what we had seen in a café nearby we wondered allowed what they did with such photos (“Would you like to see my holiday pics? Here is one of some decapitated Viet Cong, who later turned out to be rice farmers, but by the time this photo was taken it was too late for them… Oh and this is one of a bunch of villagers who were set on fire shortly after this photo, which I photographed, was taken… Or perhaps you’d like to see the deformities caused by….”).

War photography is invaluable; we respect the risks that such photographers take to document the atrocities of war, but neither of us can understand the growing trend for visiting places like Auschwitz or the Killing Fields and snapping photos of the instruments of other people’s misery. Photographing mounds of hair, bones or teeth; taking photos of other people’s photos for the family album – What is the point? and more importantly, where is the respect?