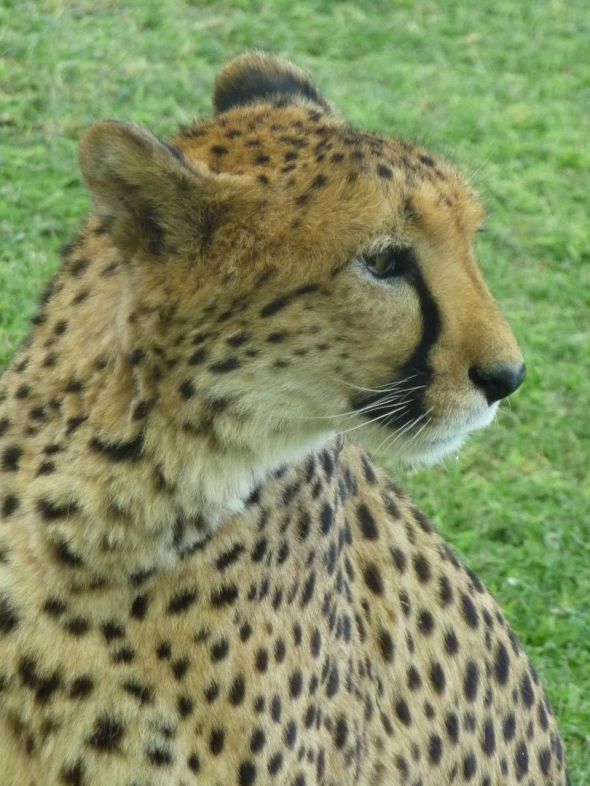 We had the opportunity to visit Kamanjab Cheetah Farm, a place where orphaned cheetahs are kept, and it is possible to stroke the ‘tame’ (if such a word can ever be correctly applied) cats. Before visiting we were quite sure that it would be a tacky, zoo-like experience, surely seeing cheetahs in such an environment was cheating? Shouldn’t they be viewed in the wild? Wrong. Our time there was one of the highlights of our entire trip to Africa, allowing us the opportunity to get an even closer view of one of Africa’s most magnificent cat species.

Arriving at Kamanjab we were confronted with a huge warning sign: WARNING: RING THE BELL! All eyes darted towards the lithe cheetah pacing back and forth behind the wire fence. Staring, pacing, prowling. Suddenly it dawned on us that the slightly muted sound of a boy racer’s suped up car engine was actually the sound produced by the deep vibration of the cheetah’s purr. 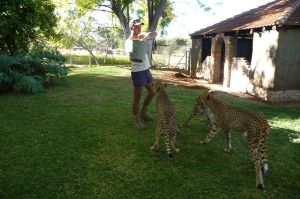 Marinus, one of the farm owner’s two sons, gave us a quick safety briefing before we entered the premises. He ran through a catalogue of don’ts: don’t touch their paws, don’t touch their tails and most important of all, if Marinus warned us to move away from a particular animal, we had to step away immediately.

When the gate was finally unbolted three cheetahs bounded excitedly towards us. Marinus led us around the back of the farmhouse as one of the three cheetahs trailed directly behind. It was deeply unnerving to be followed by an animal with the potential to kill. 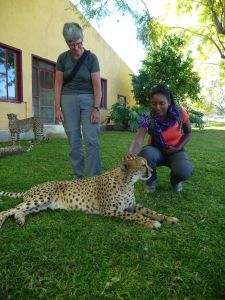 In the garden we had the chance to stroke the cats as they lounged on the lawn. Terrified, I stroked a cheetah behind ears and felt the slightly rough fur on the back of its neck. There was a disconcerting power to vibrations beneath my fingertips as the cheetah purred with delight, meanwhile Martin was licked by the sandpaper tongue of another. When feeding time began each cheetah received its own hunk of meat, which it slowly devoured as we sat on the grass a couple of metres away, glad that none of us were on the menu today. Already the trip was proving more fascinating than we could ever have imagined, yet the best was still to come.

Piling into the back of one of the farm’s utility vehicles we drove into the wild cheetah farm enclosure located nearby. Here Marinus and his family were busy rearing cheetahs to be released into the wild in regions where the numbers were dangerously low. The Kamanjab Cheetah Park is one of several non-profit farms aiming to educate people in a bid to save this endangered species. 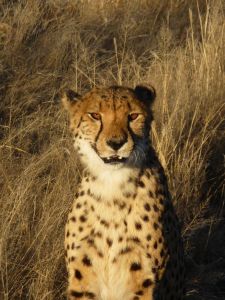 As we entered the sprawling estate a posse of  cheetahs began to trail behind us. The setting sun was low in the sky and it was clear that they eagerly anticipated dinner. In the large plastic bin at the back of the vehicle we were carrying over 40 kg of meat to distribute to our hungry pursuers. When the lid was removed we could hear a laughably bird-like noise emanating from the waiting cats. All of us were taken aback by what sounded like a Velociraptor from Jurassic Park.

Hunks of meat were tossed from the back of the vehicle and it was interesting to note the solitary ceremony of eating, which began with a competitive leap into the air. Once the meat was secured, each cheetah would dart off to devour its portion in private behind a bush or under a tree. Once the last morsel had been retrieved we were left standing on our vehicle in the deceptively peaceful grass unable to identify a single one of the twenty or so cheetahs which had surrounded us only minutes before.

This entry was posted on July 1, 2011 by mnmworldtrip. It was filed under Uncategorized and was tagged with Africa, Namibia.