The ferry from Alappuzha to Kottayam is a great way to slow down the pace and get a glimpse of daily life in Kerala. You can either travel on a houseboat for a couple of days (4500-7000 Rs), or you can take the ferry like the locals do, and cruise through one of the most tranquil parts of India. 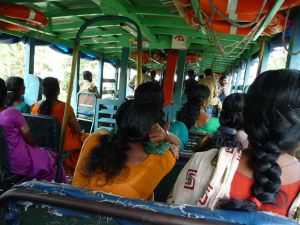 The journey takes you through tiny villages on the edge of the marshy backwaters, giving you the chance to glimpse rural life in India at its best. Houseboat cruises, designed like kettuvallams (rice barges), are big business in the state of Kerala; in recent years they have even been upgraded to match the demand for air-con, onboard chefs and romantic getaways. Though renting a houseboat is one of the most expensive experiences in India, local ferries make it possible to get the same views (though not the ambience) without forking out hundreds of Euros.

Kottayam bound services leave regularly, and at just 10 Rs for the 2.5 hour journey, cost a fraction of a trip on a tourist houseboat. Ferries travel slowly and you are likely to be one of the few foreigners onboard, which allows you the chance to rub shoulders with Indian passengers rather than simply observing the backwaters through the lens of your camera.

Here you can escape to a place far removed from the hectic roads of India. This water world is a far cry from the car horns and pollution of the big cities. Men fish, talk on their mobiles as they walk along the canals and women wash clothes and plates in the water as children splash about. With elections looming, villages are decorated with hammers sickles; cheesy posters promote plump candidates sporting sparking smiles. It is ironic to think that in the world’s largest democracy, communist flags can be seen fluttering in the wind from Kolkata to Kovalam, but in China, the world’s largest Communist nation, the hammer and sickle are gradually be retiring from public life.

From Kottayam it is a rickshaw or bus ride to the fascinating Fort Kochin, where you can maintain the slow pace for a few days while soaking up the Chinese, Portuguese, Dutch, British, Arab and Jewish influences on this small island facing the Arabian Sea.

Kochin was so difficult to leave that as we were having breakfast on the morning of our planned departure, we decided that we were not ready to leave behind the orthodox churches, 400 year old synagogue, Chinese fishing nets and crumbling colonial buildings, so we checked into our hotel for an extra night! 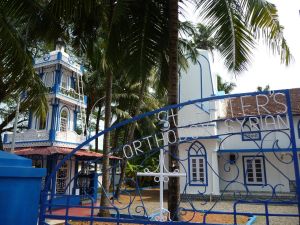 This entry was posted on April 16, 2011 by mnmworldtrip. It was filed under Uncategorized and was tagged with India, South India.